Yesterday we went to the Citizens Advice Bureau to get help filling in one of those tomes of form you need to claim anything from the Government.
Trying to get any help is like trying to get blood from a stone, everything is made so difficult and I'm sure the forms are worded deliberately to put people off from claiming.
It took the very nice man 2 hours to complete for us, so we would have been at it all night.
Anyway, its done and posted so now we wait to see if we qualify.
Praise for the CAB, they were wonderful. 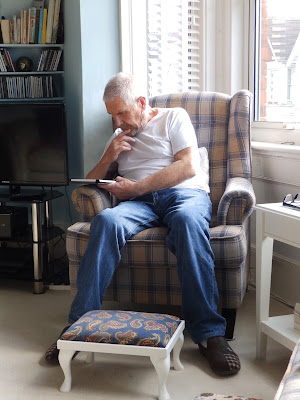 Here's my man concentrating on something or other on his kindle, probably face book, I catch him laughing to himself sometimes.  I wonder should I be worried ???
He has no idea that the photo has been taken, lol
The weight seems to have stopped coming off now and he actually looks a lot fitter and says that he feel fine. 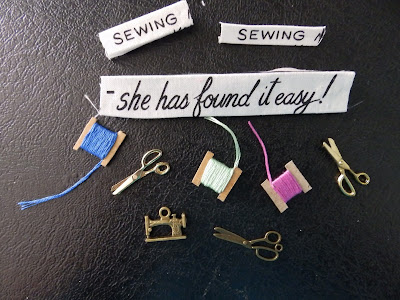 I've raked around an found some bits to attach to the caricature patchwork, some scissors and tiny maching and some words that I thought appropriate. 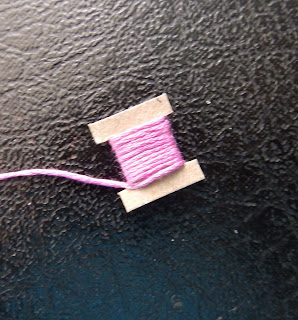 I thought some reels of cotton would look good and so made some tiny card shapes and wound the silk around, I think they'll pass for cotton reels once in place.

By the way... I thought the film 'The Post' was as equally boring as the Churchill film.
I suppose it would be okay if I knew anything about American politics but I don't and so I was lost.
Maybe it's just me. LOL