Another trip to A&E last night.
We are both sick of visiting this hospital and want an end to it all.
Yesterday Tom went in early in the morning to have his Angiogram.   I picked him up around 2 o'clock and we went for a pub lunch.
After lunch he became very breathless and by the evening we decided to call the Cardiac ward.
We were told to call an ambulance in case of complications and were duly taken to the hospital.
If ever you thought that the media is exageratting the hospital crisis you would have had your minds changed last night.
We have visited this hospital many, many times but I have never seen it so bursting at the seams.
We were placed in a corridor along with another 5 people on trolleys and several people in wheelchairs.  There was just enough room for the staff to wheel people through and no beds in either the side A&E wards or the main wards in the hospital.
I cannot fault any of the staff, nurses or doctors but surely something has to be done by this Government to put the NHS back on its feet again.
Tom had all the tests and was sent home, but after an Angiogram and with his problems we were told that we did the correct thing to get him checked out.
Please....... let there be no more visits to hospital..we've had enough

Remember me posting this back in September.
The tree outside the front of our house had to be cut down because it had dutch elm disease' 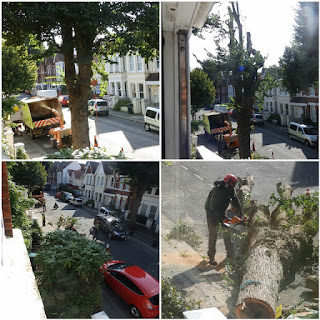 Well, a few nights ago there was a very bright flash outside in the street but we thought nothing of it.  Our power was still on and we left it there but it appears that the tree roots must have damaged a cable and taken the electricity out from out neighours house. 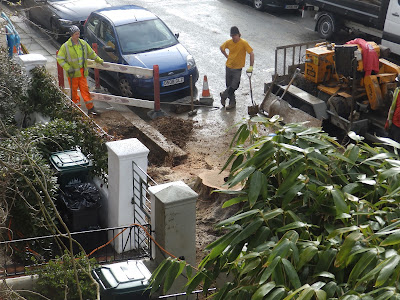 Nothing for it but to remove the tree trunk that was left and the roots.
Easier said than done.
That old tree wasn't going without a fight.
We've had men all day with diggers and various cutting tools and its still hanging in there at 4 o'clock in the afternoon. lol 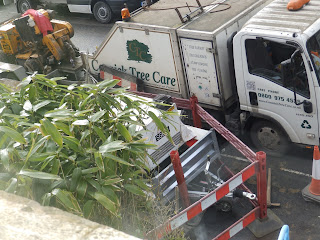 I just hope they get it done soon as we've had a generator outside for a week giving the neighbour electricity and the racket it makes is horrible.
Posted by crafty cat corner at 15:38