Our kettle recently started to leak, we haven't had it that long but as nothing seems to be made to last we binned it and decided to buy another one.

In the past we've bought kettles of various prices and found that no matter how much you pay non of them seem to last any longer than the other.

We found a nice red one on Argos and as I like my bright colours we bought it. 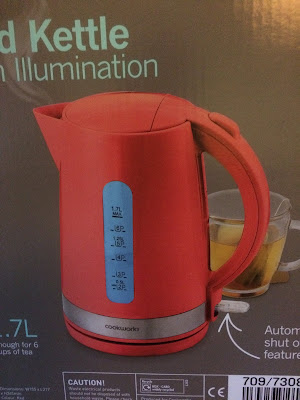 We bought it home and boiled water in it a couple of times to remove any newness from it then made our first cup of tea.
UGHHHHHHH,  It  tasted of plastic.
On to Google to see what to do.
It would seem that its a common thing as lots of people had posted the same problem.
One remedy was to use bicarb to remove the smell/taste, it did not work.
We tried boiling it a lot more times but no, still plastic tasting tea.
So we bit the bullet and bought another one made of glass like our last one. 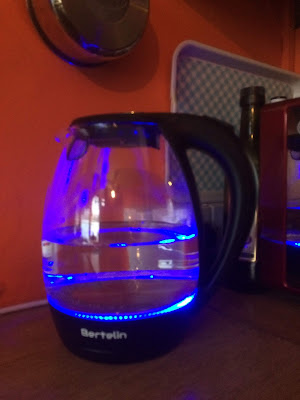 Ahh, a decent cup of tea at last.
Now, what to do with the red one.
I think Argos are funny about replacements if they have been used, I've had dealings with them before so it would probably mean contacting the manufacturers.
Can I be bothered?
As I like to be hassle free I don't think I will.

Anyone else had the same problem?
Posted by crafty cat corner at 16:53