SLEEPING ON THE FLOOR

Last night I was due to sleep on the floor on just the mattress.

The reason being that I needed to clear my bedroom in readiness for my new double bed. Whoopeee.

We managed to slide the single bed down the stairs to enable us to give the bedroom a good clean and make it easier for the delivery men to take the old one away. 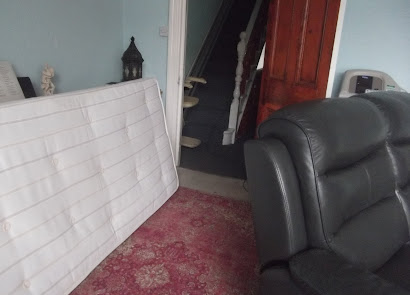 Here it stands waiting to be taken away.  Just to be used on the floor for the one night.

The base is outside the kitchen.  A bit of a squash to get by but not for long.

Tom sleeps downstairs and I sleep upstairs, lots of reasons, but snoring from both of us is one and I get hot and like to move about a lot.
I have been sleeping in a single bed but with my joints giving me jip it is difficult to turn over without having to pull some part of me the wrong way and get pain. With a double bed, if I sleep in the middle I shall be able to roll either side with no fear of falling out, lol
AMENDMENT TO ABOVE
Whilst sitting watching tv last evening I saw an enormous spider scurry across the carpet and disappear under the sofa.
I have nothing against spiders and would not kill one but this one was BIG.
Whoaa...I did't fancy sleeping on the floor with that around. My mind had it crawling across my face in the night.
So, we decided to take the mattress back upstairs.
Not so easy.
The end result was that Tom pushed and I pulled and Tom almost died on me.
He shouldn't have attempted it but he did and ended up almost keeling over for lack of breath.
It was quite frightening to watch and we had to wait for the oxygen to get going before he felt okay again.
We both realise that he shouldn't do these things but when you've been a big strong man it's hard to accept that even pushing a mattress is too much.
Lesson learnt though, no more strenuous escapades.

Another adjustment for being a senior.  There have been lots over the past couple of years and there's nothing that can be done but accept them.

New bed is in place and looks and feels great.

Only worry was that the delivery men said to let it air for a few hours to get rid of the chemicals that are on it regarding fire retardant.

Don't like the sound of that much but guess its the norm now.