On a previous blog, the one with the cats chilling out to classical music , Sandra mentioned that she could see 4 cats in the picture.

She was right of course as there is another one sitting on the fire.

This isn't a real one but has the name of Hector.

He is pottery and I bought him for about 17 shillings old money way back in the late 60's in the Lanes of Brighton.

I remember that I didn't really have the money buy it but I scraped enough together and splashed out. I've never regretted it.

That was before decimal money came into existence and they are now selling for anything from £70 upwards.

He has glass eyes and people often comment that it looks as though he is following you around the room. lol 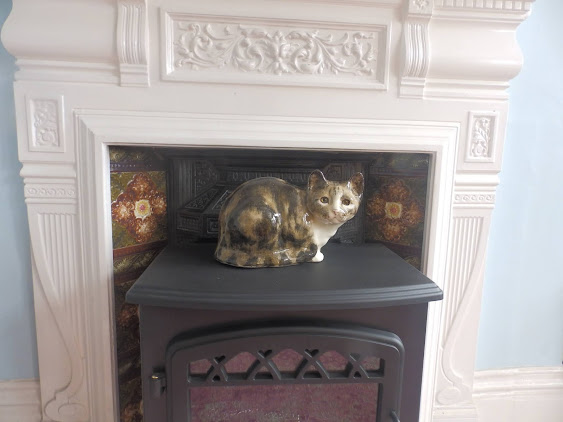 I could never part with him as he's been with me so long and the fire is the safest place for him to sit, one of the places that the furry menaces do not go.

I have seen lots of these cats recently but none of them have the finish of this one and are probably mass produced.

We actually got to visit the place where he was made in Norfolk where Jenny Winstanley who was the originator and maker of these cats.  Sadly she is no longer with us as she died in 2004 but we were able to see the exact place where Hector began his life.

Her son is now carrying on the business and exports all over the world but I'm proud to have one of the first of the many cats she made and Hector has the no 40 on his underside quite possibly referring to being the 40th made with this mold.