SPACEMEN AND THE FUTURE

I was lying in bed this morning thinking about how things have changed in such a short time in my life.
This got me thinking of the comics my brother used to read, particularly the Eagle comic.
Remember the spacemen in their spacesuits floating out in space connected by a long wavy tube, we all thought it was great but a fantasy, never ever imagining that it would actually happen in our life time.
This then took me on to the series StarTrek and how they beamed them up in a portal, disintegrating them and putting them all together at another destination.

Its a shame that I am so old because I fear that I won't be around for this, but if the spacemen came to be reality who's to say that beaming up won't be in the future.
We could both do with being beamed up to go anywhere now, it's getting to be a nightmare with both of us so decrepit now, lol.
Do you see how my mind works? its full of rubbish most of the time. lol 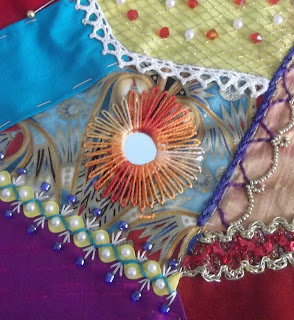 Did a bit more to the book cover yesterday.
As you can see, I've worked around the mirror and am now ready for some beads for a bit more bling.
Posted by crafty cat corner at 09:06