I wrote a post recently about our Grandson who had taken in a rescue dog, an English Bull Terrior called Patsy.

This dog had been used as a breeding dog and they were told that she had had two litters.

They took her in and found her to be a lovely natured dog who loves all the affection they give her.

But..... she has come with problems that they were not aware of.

The main problem is that she does not like going out and is frightened of other dogs.

The first few days she did her business in the flat but after coaxing she is now doing it outside, but to get her out (they live in a flat at the moment) they have to lay a trail of treats on each stair tread to encourage her out.

It now turns out that she has been used solely as a breeding dog and lived in a pen on woodchips for all of her life with probably no interaction with other dogs and not many humans.

They took her to the vet for a thorough check up and he thinks that she has had many more litters than two.

My Grandson and his partner  have employed a 'dog whisperer' to try to help her to adjust to normal life but in the meantime she is just so happy with them.

Their next thought is to move to a house with a garden to help her to become more out going.

I write this to bring this disgusting business of breeding dogs for money and not caring for their welfare to the fore.

If they had not taken her it would more than likely have been the end for her. 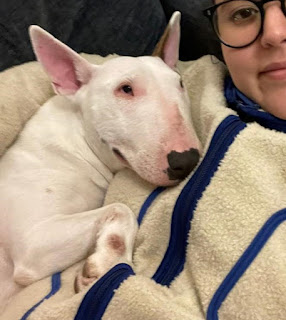 Here she is snuggling up.
She's lucky but how many poor dogs are used and then discarded, it breaks my heart to think.
Briony
x