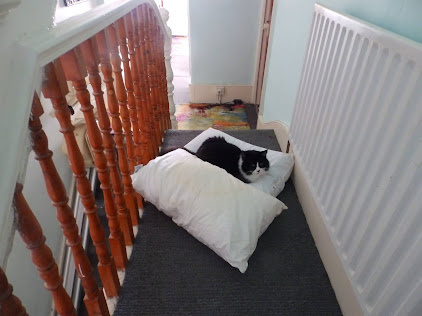 This morning I've been up in the big cupboard in the spare room trying to make room.
This is the 'throw all' cupboard for useful things that might be needed in the future but very rarely are.
I have so many pillows that I save for the stuffing for toys etc that will probably never be made and decided that I must be brave and start throwing these things out.
To save me going up and down the stairs I threw them over the top to pick up later.
Rowan decided to make them her 'best spot' for the morning and we are picking our way along the hall until she decides to move.
That's the kind of thing cat lovers do because we are all nuts. lol 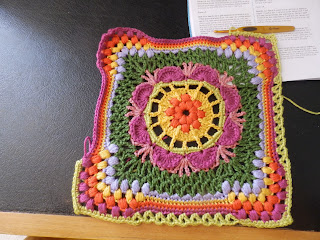 The crochet throw is coming along nicely (shown in progress above) and I'll soon show the finished square.
It's taking more time as I'm doubling up and making the exact same square each time with some of my own wools in different colours so that I will have two throws the same but different wool and colours in the end.
Mr.Hedgehog has not been seen since but that doesn't mean he's not coming, still keeping an eye out for him.