I am currently working on a jigsaw puzzle called 'Gritting the Road' and this got me thinking of my childhood when the gritters would regularly come around putting new road surfaces down with tar and covering the tar with grit. 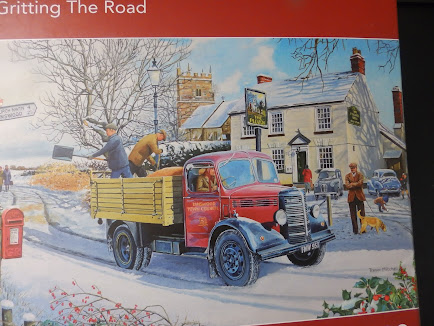 I'm not sure if this procedure is or was done in other countries but in uk it was a common method of road surface and even the small side roads were regularly repaired in this way.

The only drawback for this was that when we kids fell over, and we often did, the grit would embed itself into our knees or hands and it meant a short break in playing out to let your Mum dig the grit out, plaster the wound with some ointment (note the old word for antiseptic cream, lol) stick a plaster on it an send us on our way.

No thought of bacteria getting in then, just plain old fashioned stuff from the biscuit tin that served as a medical box. Another memory was making 'tar lollies' with the tar.
We would get old ice lolly sticks and twirl them in the tar to make lollies (none edible of course)
In those first years after the war all of the roads were maintained and even the side roads were kept in good order.
What happened then?
There must be enough money in the coffers now, more than in that time and yet the roads are appalling dotted with pot holes.
And all this post inspired by a jigsaw, lol
Posted by crafty cat corner at 10:36