FIGHTING ALL THE WAY

Once again the Government are having to make a u turn.

Virtually all of the males in both sides of our family have had or died of heart attacks including Tom.

All of them were only in their 50's at the time.

My Father suffered a massive heart attack after going for a swim.

Toms youngest brother literally fell off of an exercise bike in the gym and died on the spot and his other brother died alone at home.

My brother had a triple bypass.  These are just some  examples as to why he is objecting.

We all know by now that there is very big risk of heart problems with this jab. 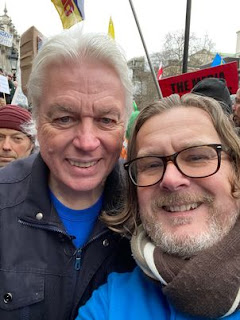 He is right now in London with his family protesting and as a laugh I asked him to get me a pic of David Icke.
As it happened he turned around and there he was, happy to oblige with a photo for me.
Of course a lot of readers will have caustic comments on this post but they will go over my head.
Posted by crafty cat corner at 16:51