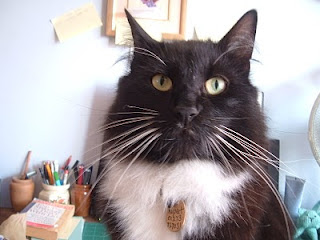 We are completely devastated here.

Rupert was not his usual self on Friday last week and we took him to the vets thinking that it was another stuck fur ball.

After a follow up on Saturday and another on Sunday blood tests were taken and it was found that his Kidneys, Pancreas and Liver were giving up.

All this came as a complete surprise as I was preparing to pay for another op to put him right and didn't contemplate that he may have been ill with anything else.

I didn't hesitate to in my decision to let him go to sleep but we are upset beyond measure.

I have buried him in my little garden and know that he is no longer in pain.

Things are not so good here.  Tom has had another heart attack but has got over it,  the problem is that  it has made his breathing a lot worse and he is really struggling.

Nothing more can be done to help and it's not nice to see someone ill and not be able to help.

He had a panic attack the other night and we had to call in help but once he had calmed down he was okay.

Pretty scary for both of us.

He's getting up a lot later now but still enjoying his food and able to do his jigsaw, and just like him, he's not complaining at all.

On a nicer note, the Bijou Garden is looking good this year considering that I was not going to bother. 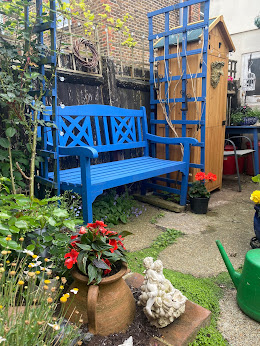 Here you can see the little sentry box shed that was erected in place of the other blue one. 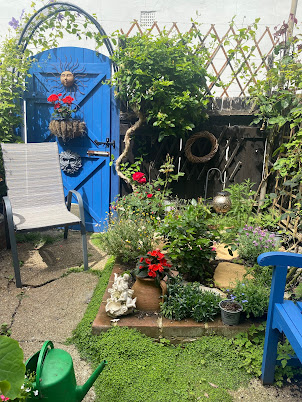 I re-painted the gate and bench. Had to have lots of 'sit's down's' lol,  but got there in the end. 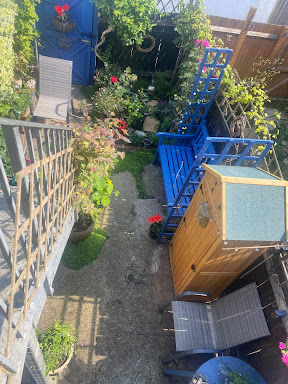 Both honeysuckles on either side of the stairs have been awful this year.  Anyone else had trouble with honeysuckle? 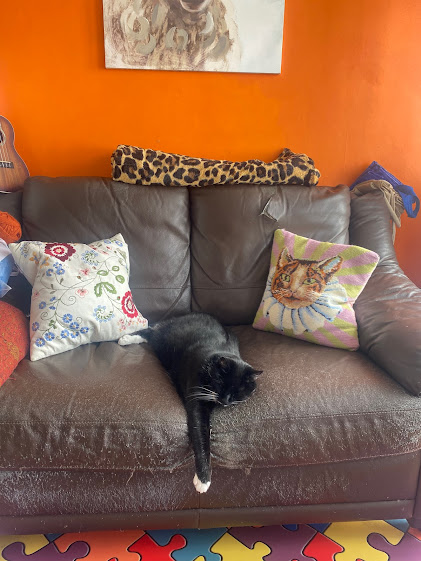 This is my sofa 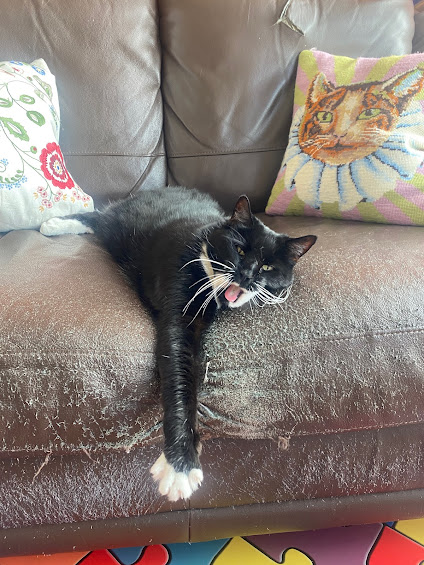 I've had a few messages asking where I am and so I thought I would let you know that I am fine.

Things are not easy here and not conducive to blogging.

I can assure you that when things are better I will do a post.

Thankyou for your enquiries.

WE SAW A STOAT

It was a beautiful day today and so we decided to take a drive around the Sussex countryside.

Everywhere there were different hues of green with the new leaves coming out, and the lambs in the fields made it just a lovely day.

As we were driving we saw an small animal dash across the road and recognized it as a Stoat.

This is the first time we've seen one in years and it was such a joy and made my day.

It's not often you get the chance to see these little creatures.
Neither the stoat or weasel is in any real danger of extinction in the UK, they are however threatened by hunting, habitat loss, poisoning and both often get run over on the country lanes.

After reading the passage above I can well believe that they are in danger of being run over.

Spotting the Stoat made my day.

What were they doing this morning. 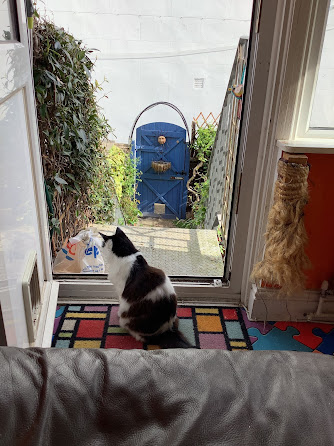 Polly was gazing out of the back door. 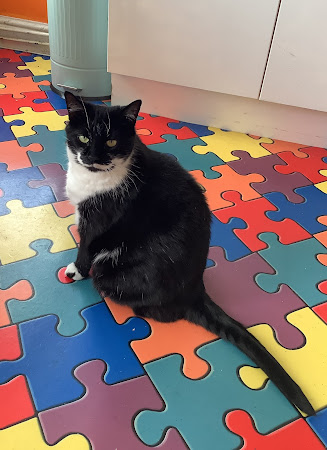 Princess was hoping for more biccies 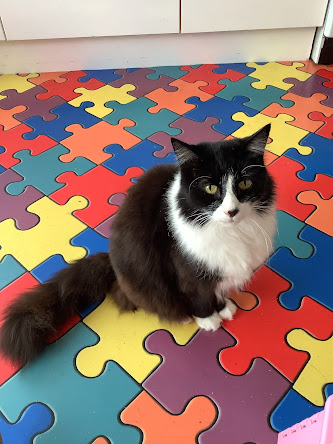 Rowan was looking all innocent and lovely as usual 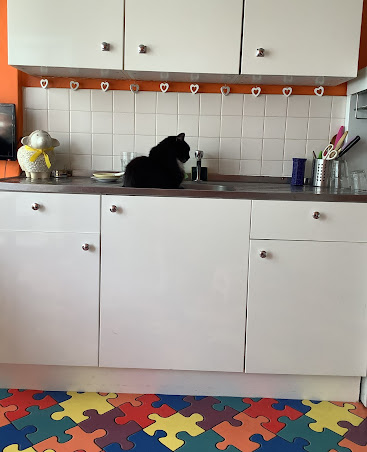 Rupert was snoozing in the sink. 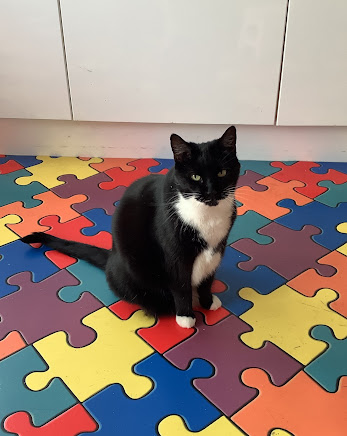 Willow looking a bit sneaky. lol
They are all 14 years old next month and Polly with be roughly 15.
They said it was a long time since they'd been on show and so I obeyed their wishes. lol

Amber my Granddaughter came to see us last week as she is home from Uni for the Easter.

She is on the final run of a three year stint and is actively looking for work.

I didn't realise quite how difficult it is for these young enthusiastic kids to get a job these days.

Apart from the fact that there a many people all after the same job when you get there, it is a whole day of interviews, exams and working for several hours on the spot to show how you perform.

All this and a scant chance that you might get the job and if you don't, going all over it again and again with different employers.

I recently had my groceries delivered by a lovely young boy who told me that he had finished Uni with a degree and just could not find a job. He had had to take this job to fill in until he was able to find something more suitable to his knowledge. 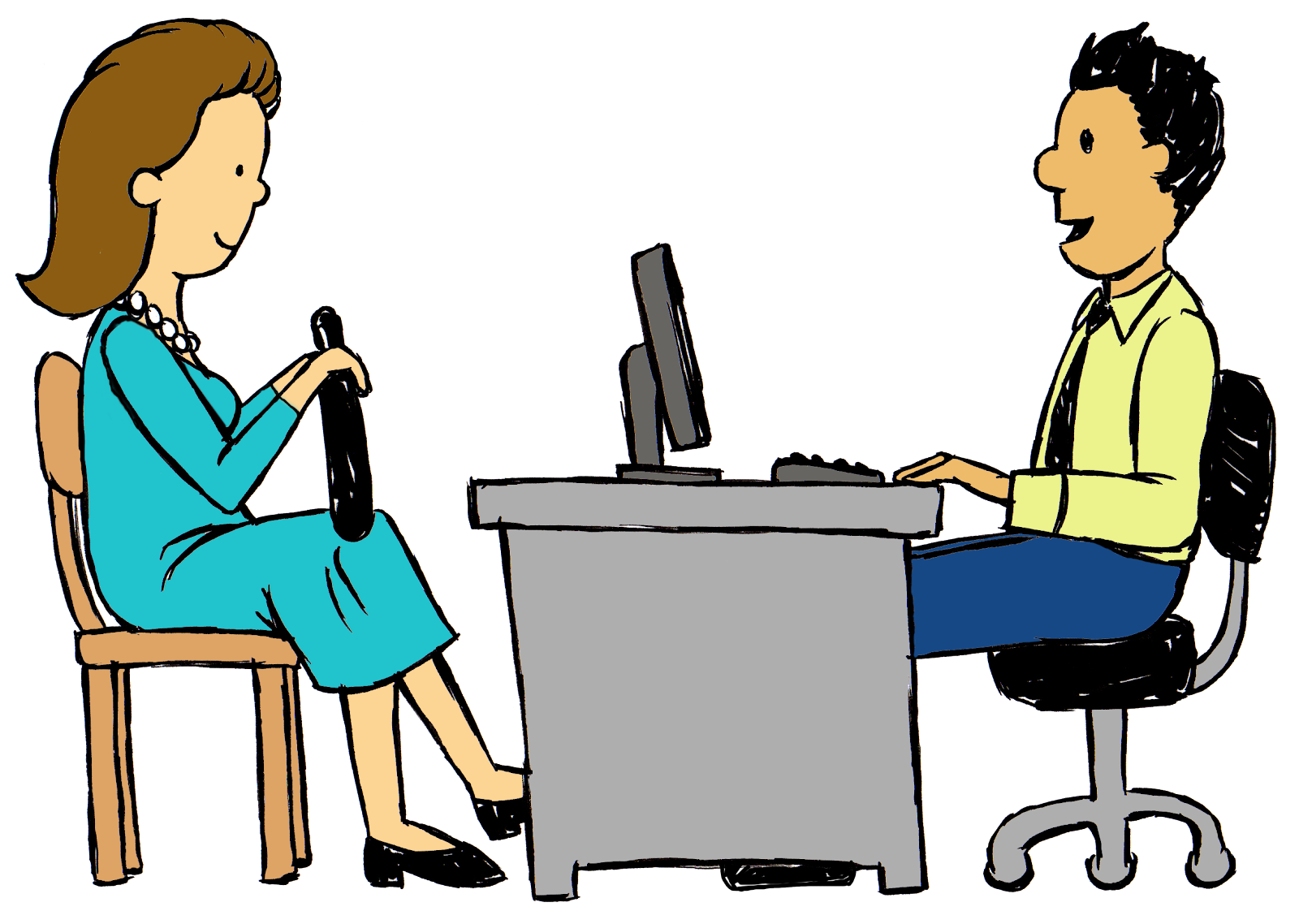 How soul destroying for these young people who are told to work hard in order to get a good job only to end doing something menial not connected to their studies.

When I was young all you had to do was buy a newspaper and browse the job column, pick a job you fancied and apply.   Nine out of ten times you just went for the interview and got the job.

How times have changed. 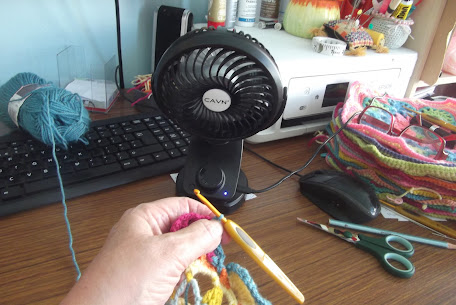 I have treated my self to a mini fan to keep my fingers cool in the summer.

No wonder Amazon is doing so well, the small shops just cannot compete with variety and cost. I ordered last night and its here this afternoon.

Such a shame for the small traders. 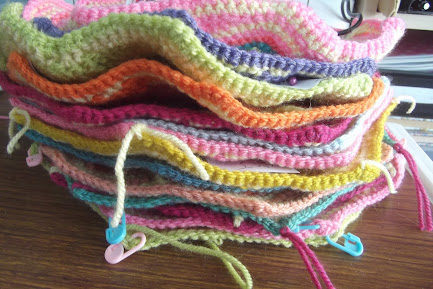 A nice sandwich of Persian Tiles with just 2 1/2 to go before I start to sew it up.

Have a good Easter 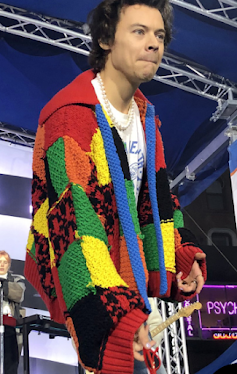 Here is Harry wearing his crochet cardigan costing the earth. 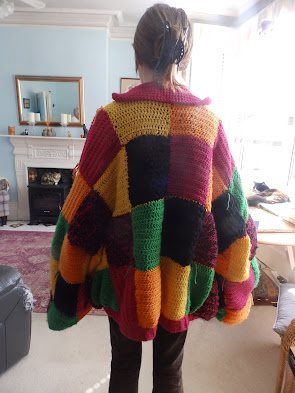 And here is Sophie in hers, made for a fraction of the price. 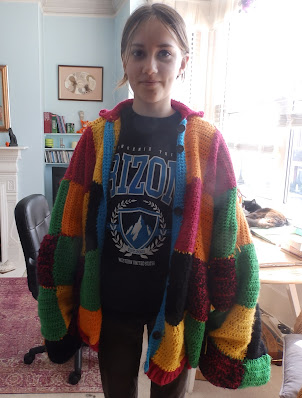 Not bad for a first attempt.
Sky's the limit I'd say.
If you are wondering about the sleeves, they are supposed to be like that.
Posted by crafty cat corner at 19:09 16 comments:

We have a pair of blackbirds nesting in a very large bush in one of the back gardens nearby.

We've watched them collecting worms from our tiny garden and enjoyed their company.

This morning I awoke to loud distress calls from these blackbirds and looking out of the bedroom window immediately  saw the reason. A magpie was darting about in the bush where the nest is. 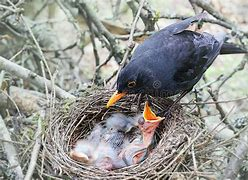 They tried valiantly to scare it off but it went deeper into the bush.

I had to come away from the window because it was so upsetting and a short time after the noise stopped.

I have to assume that the magpie was successful and all the hard work that these beautiful birds had done was for nothing.

This made me think about the fact that once upon a time magpies were purely country birds and did not come into the built up areas.

Cats have a bad reputation for the loss of the bird population but watching this horrible scene made me realise that possibly the magpie is more of a challenge to the nesting birds than the cats are.

Not a good way to start the day.

The study found that songbird numbers were no different in places where there were many magpies from where there are few. It found no evidence that increased numbers of magpies have caused declines in songbirds and confirms that populations of prey species are not determined by the numbers of their predators. Availability of food and suitable nesting sites are probably the main factors limiting songbird populations.

So after finding this passage on rspb website this would tie in with my hatred of paved gardens. Lack of bushes and trees seem to be the main reason for the decline in birds.